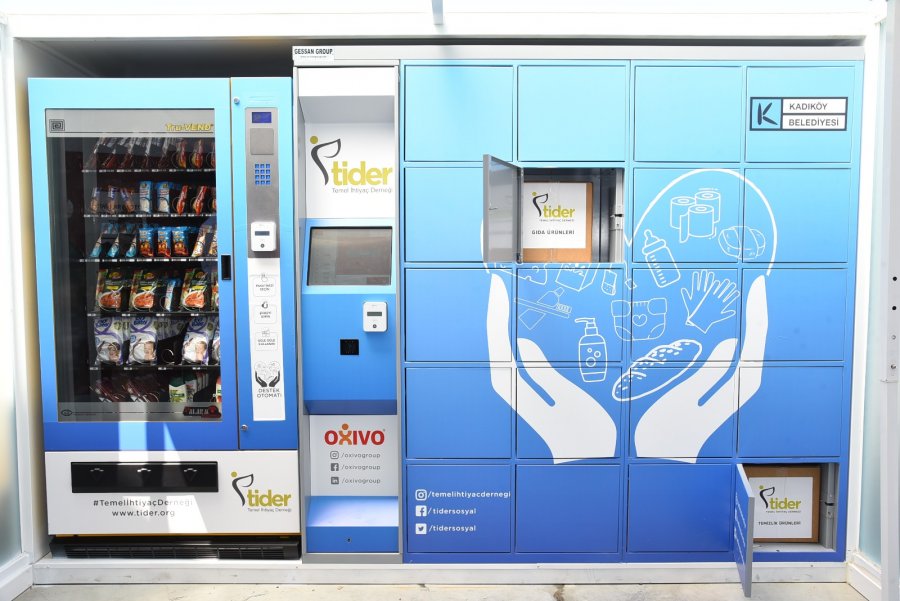 Basic Needs Association, the umbrella organization of food banking in Turkia (TIDER), Oxivo Group and the Kadikoy Municipality have signed for the first time a policy with a more valuable contribution. This week's article is about "Vending Food Banking", which overcomes the social distance problem in the pandemic environment.

While starting the article, let's remember the definition of a food bank first. Businesses formed by non-profit associations and foundations that supply all kinds of donated or overproduction healthy foods, store them under appropriate conditions, and deliver these products to the needy directly or through aid organizations free of charge and these are what we refer to as food banks. In addition, food banking includes other basic necessities such as cleaning products and clothing.

I have known Sezer Arslan, the founder and General Manager of Oxivo company, for a very long time. He visited us at our old company headquarters in Maltepe during the years when I left my family company and started my own initiatives. He explained how pleased he was with what he saw when he visited the food bank at the location where the company headquarters was located, which I initiated and TIDER opened for the first time. Afterwards, our friendship continued, and in 2017, when we moved to the new company headquarters in Cekmekoy in the following years, when he visited me for the first time, we talked about different thoughts, models and technologies. Among the many subjects we shared was "Vending Food Banking". In other words, I am talking about the delivery of basic necessities such as food and cleaning products to the needy through a vending machine. We agreed that this is a good workable model.

After that, we got in touch from time to time by phone. While I was thinking about what could be done when the Covid-19 environment occurred last March, "Vending Food Banking" came to my mind. Afterwards, I called Sezer Arslan without wasting time and told him that it was the right time to implement vending food banking during the Covid-19 epidemic. Thanks to him, he gave me an opinion that supported this idea and immediately afterwards we started to talk about how we can achieve this project. Mr Sezer did not just talk, he stated that they could technically undertake the construction of this first automat machine.

Taking care of the technical side, which is the most important part of the job, took a huge burden off us. Oxivo undertook the technical preparation of the vending machine, and TIDER took the operational side such as preparing the basic products and delivering them to the vending machines. The last piece of the puzzle was a public institution that would determine the location and identify and guide those in need. For this, we started negotiations in our district, in Maltepe, the place where TIDER was first established. We contacted the Maltepe District Governorship and certain private sector organizations for locations. Unfortunately, none of them gave us the result we wanted.

The contribution of the Kadikoy Municipality

As a result, in the Covid environment, it was on everyone's mind to distribute the parcels with basic needs products by observing the social distance rules in the open garden area. As a result of the meetings we held in April, while all the planning, vending machine production tests were implemented and we were waiting for the operational dates from the Kadikoy Municipality, which was on the 12th of August.

Of course, opening up in a pandemic environment was not easy. Everyone was masked and I got the first word in this event we organized while trying to keep a social distance. I would like to share some parts from my speech below:

Later, the Kadikoy Mayor, Serdil Dara Odabası took the mic. He gave a speech as per below.

Afterwards, our Mayor showed the press members how the vending machine worked:

After the good wishes and last speeches, we ended the ceremony.

The vending machine, introduced to the press by the Kadikoy Mayor Serdil Dara Odabası last week, started its service today with an event attended by families in need.

The Basic Needs Association, which is working on an unmanned Food Bank Project due to the pandemic, placed the Food Vending Machine designed and produced by the OXIVO Group in the garden of the social services unit of the Kadikoy Municipality in Merdivenkoy. The opening of the vending machine was held last week with a ceremony attended by the Kadikoy Mayor, Serdil Dara Odabası, the TIDER Founding President H. Serhan Suzer and the OXIVO Group General Manager Sezer Arslan.

The Kadikoy Mayor, Serdil Dara Odabası said at the opening ceremony of the Food Vending Machine last week, “The only thing that can be praised here today is kindness. A project where technology and solidarity have come together. The only thing that can be glorified here today is goodness. It is also a good thing that the giving hand does not see the receiving hand. A kindness that is sincere, far from showing off, and that does not offend; this pilot project which was implemented for the first time in Turkia in which the needs were identified by our municipality and developed by the OXIVO Group software, with TIDER undertaking the supply. The project is also an example of solidarity in this aspect”, he said.

The TIDER Founding President H. Serhan Suzer said in his speech at the ceremony; “In this period when we are experiencing the Covid-19 pandemic, unfortunately, millions of our citizens who did not need these items, now unfortunately do. Unfortunately, this situation will continue exponentially until a vaccine or drug is found to eliminate the virus. That is why it is very important for NGOs like us to take an active role in solving problems. We want to do our best to help our people and our government. As TIDER, we have helped approximately 250,000 families with the support of our sponsors since the beginning of the pandemic. In order to undertake a project like this under the current pandemic conditions, we were happy to activate this Vending Food Banking system for the first time in Turkia. Here, we would like to thank the Kadikoy Municipality for their logistical and operational support to the project, and our strategic partner, Oxivo, for their financial and technical support. After this, our goal is to create food banks and soup kitchens in store formats and support in every district of Turkia, and to implement a Food Vending Bank in every neighbourhood. In order to achieve this goal, individual support is essential in cooperation with the Public and Private Sector."

Introducing a food and cleaning parcel

The food vending machine, which is located next to the Stray Animals Rehabilitation and Training Center of the Kadikoy Municipality in Merdivenkoy has a capacity of 20 cabinets, has two different types of parcels containing food and cleaning products in it. In addition to food and cleaning packages that can meet the monthly needs of a family, there are also products in the vending machine that are not included in the packages such as biscuits, wafers, shampoos and toothpaste. Food materials such as tomato paste, oil, legumes, salt, flour in the food parcel; There are products such as soap, detergent and bleach in the hygiene package. The location of the pilot project started in Merdivenkoy which was chosen as an invisible but safe area that those in need can reach on foot.

The Municipality determines the ones in need

Those in need, who are identified by professionals such as psychologists, sociologists and social workers working in the Kadikoy Municipality, will be able to receive their parcels at any time by entering the code to be included in the SMS sent to their mobile phones on the panel on the vending machine. In the project, whose design and software was developed by the Oxivo company, the needy, suppliers or municipal employees will not contact each other. The empty vending machine compartments will be regularly filled with new ones by TIDER. Products donated by individuals and companies within the scope of "food banking" will meet with those in need.

We will start testing 15 days after the opening on August 12, and continue by increasing the limited number of aid packages that we deliver to needy people in Fikirtepe. In the first stage, we distributed food and hygiene products. Later, we will distribute products for babies/children and animals. After bringing the operational system to perfection within the first year, we are planning to bring the "Vending Food Banking" to other neighbourhoods of Kadikoy, all areas of Istanbul and even after, to be implemented in all of Turkia's neighbourhoods. Imagine having Support Markets (food banks in grocery format) and soup kitchens in every district of Turkia, and that our vending machines are placed in accessible neighbourhoods. Imagine how that would be?

That would be great. This way, we have created a model that meets the basic needs of the needy even in the remotest corners of the country in the fight against poverty. Moreover, vending machine food banking is perfect for the Covid environment we are in. In short, we are still at the beginning and we have a lot of work to do. We will continue to do our best for the country with the best. The support and cooperation of the public and private sectors is very important in order to establish this system as planned. This is also an announcement to those interested in participating.