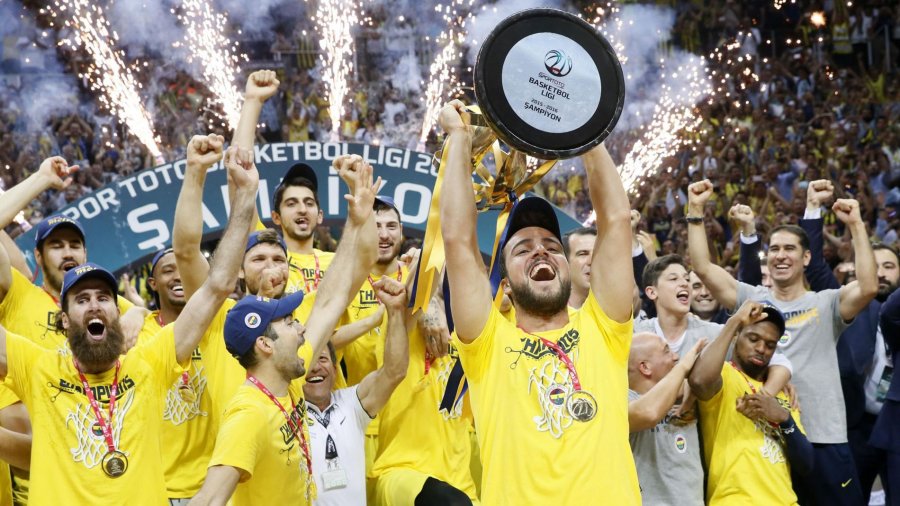 First, I extend my heartfelt congratulations to Fenerbahçe’s basketball team for winning the Euroleague championship. What a great success for Turkish sport. I wanted to write this post on the evening of the championship because it is about the sport community in Turkey. We need to properly analyze Fenerbahçe’s win, the achievement of its incredible coach, Obradovic. Since 2013, he has worked with the right people to constantly improve the team on its path to the championship. His success in creating an oasis in the middle of the desert should not be viewed as our success. What I want to write about today is the desert we have created.

When Beşiktaş’ football team was eliminated from the European Cup, the people in charge at Galarasaray fired off tweets highlighting Galatasaray’s UEFA championship a full 17 years ago. These are the very people I advised to “wise up” in my post entitled “How to reverse Galatasaray’s seemingly unstoppable decline”. I also wrote that it was high time we showed these people the door. To refresh your memory, here’s a link to that post: http://serhansuzer.com/en/how-to-reverse-galatasarays-seemingly-unstoppable-decline

Last week, on 17 May, the Galatasaray Sports Club staged an event in Turkey to which the legendary team players who won the EUFA Cup were invited.

Winning the UEFA Cup 17 years ago

On social media, Galatasaray fans wildly celebrated the UEFA Cup victory 17 years ago. I always enjoy the sight of former players at events such as this one and I’m always happy to see such Galatasaray legends such as Prekazi, Turgay and Hasan Şaş. However, I, a die-hard fan of Galatasaray, was put off by the tenor of these celebrations. Here are some photos from the event:

Naturally, this achievement will always be a source of pride and joy. However, continuing to celebrate it as though it were an annual festival despite having failed to post any new achievements since rings a bit hollow, in my opinion. What I’d like to talk about is the deterioration of our team’s performance ever since that year, our balance sheet and the statistics with which we measure success.

Last year, on 19 May, a youth and sport holiday on which we remember Atatürk, I remember reading this headline in Hürriyet, a leading newspaper: “Here’s the 2018 Model Galatasaray. The earth will move!” Here’s the article: http://www.hurriyet.com.tr/sporarena/galeri-iste-4-buyuklerin-yeni-sezondaki-kadrolari-40462697#page-15

This kind of empty boosterism gets me down. This is what goes through my mind:

We witness the same empty chants every year. In an environment in which the assumption is that one of Istanbul’s three big teams will win the championship (and keep in mind that even though it doesn’t happen often, teams outide the big three have won), the chairmen and the directors of the other clubs start sounding off. The press either mirroring this or starts agitating for higher ratings with news about the three big teams that have lost hope of winning the championship. The transfer of all the major players in the world to Galatasaray, Fenerbahçe and Beşiktaş begins. Messi and Ronaldo are about the only players who aren’t approached. Players come and go. When there are reports of a star player being transferred by one big club, the other two clubs try to alleviate the pressure they’re under, which means beginning the process to transfer different players from that same country

Of all the transfers, the one that made the laugh the most was that of the French striker Nicolas Anelka. At that time, Fenerbahçe had really transferred a lot of top players. For example, they succeeded in bringing to Turkey the global star Roberto Carlos. Anelka may have been nearing the end of his career, but he was still a legend and his arrival at Fenerbahçe was thrilling, especially for that club. Everyone was expecting Galatasaray to respond with a similar high profile transfer, but instead they decided on a player everyone considered to be out of shape and not in the least attractive: Franck Ribery.

When Ribery arrived at Galatasaray, all the Fenerbahçe fans made fun of us by referring to a TV commericial that was popular at the time. “Anelka’s bonus came,” they would say. We later saw what that “bonus” could do. A player who was young, but had immense potential, Ribery’s career later soared to incredible heights.  I could even say that the career of Ribery, who is still a top player at Bayern Munich, has eclipsed that of Anelka. The only down side was that everyone at Galatasaray was sad to see him go after only a year. It’s additional proof of our managerial weakness.

Following and imitating instead of leading

The three big teams, who keep tabs on each other, copy each other’s moves and try to keep up with each other, care only about not being left behind. How’s that for a sense of vision? They decide on a course of action simply so that nobody will ask them why didn’t do what the other two teams did.

They haven’t got a master plan or professional directors who would be able to implement a plan. All they do is squabble with each other and make flashy announcements to keep their fans happy, etc. etc. The result? Turkish football clubs that are left by the wayside, who huddle together like vultures and who get smacked down when they compete for European cups.

My generation made serious progress when it came to Turkish football. I wrote about this in a piece entitled: “Ego will be the end of us”. Below you’ll find an excerpt from that post (http://serhansuzer.com/en/ego-will-the-end-of-us) in which I recount an experience I had a long time ago.

“… back then (up until the ‘90s) we were so resigned to failure that we rejoiced if our team lost by a small margin. Fortunately, my generation’s inferiority complex, which made us say, “We lost, but at least we weren’t crushed,” is now a thing of the past. I have vivid memories of what it was like back then.

For example, from the ages of 11 to 16 I went to summer school in England. I can say that those summers were the most enjoyable of my entire youth. In those years, I remember being beat by England 8-0. As we settled in to watch a match against a European team – particularly from Italy and Spain – we’d joke, “Let’s see how much they beat us by this time.” This joking around naturally affected our sense of confidence and made us even more determined, fierce fans when we watched a match. I also remember periods in which we won all our matches or in which we lost to those who ridiculed us by a slim margin like 4-5.

Actually, since the founding of the Republic my generation has been one that has taken Turkey to the next level in a number of areas, including sport. I’ll give another example, this one from my university years. During one of my summer breaks I went to Harvard University to take macroeconomics and advanced algebra classes for which I received credit at the university I was attending in Canada. I had two roommates at Harvard. One was a computer engineer named Peter, an endearing almond-eyed guy with a southern accent I’d chat with when I had the chance, but who was almost always in the computer lab. My other roommate was Austin, a tall good-looking guy who played pro soccer in Colorado. Austin and I always hung out together. When we learned shortly after we met that we both shared a passion for football we found a ball and started playing together in Harvard Yard. When others saw us playing they joined in. By the end of the first day we had 6 or 7 people. We had an even bigger crowd the next day, and the numbers only grew. Austin and I got a reputation as the football players. Whenever anyone wanted to play they would call us. By the end of the first of my two months at Harvard, there were too many of us to squeeze into the Yard and we began to organize tournaments at a real pitch on the other side of the river in Boston. It was great fun. One day, Austin asked me: “Serhan, we’ve been playing football for a month and I’ve told you where I play, but you never talk about your career. Where do you play?” I was in a joking mood, so I told Austin I played for Galatasaray’s PAF team. “I can tell,” he replied. I just smiled. In fact, I had no professional experience. Mostly, I had just kicked around a ball with my twin brother or played with the local kids in the streets of Bebek where I grew up. Strictly for fun, I had also played on my high school team. There is nothing professional about my experience with or approach to football, but, as an amateur, I am passionate about the sport and give it all I’ve got.

My generation’s success in football

That summer in America I was suddenly regarded as something of a “star” at my level of football. Although I’d played defense in high school, in the matches in America I moved right to center position and was effectively the team captain. I also have to allow that I improved greatly due to the frequency of our matches and practice sessions. I was known at Harvard as the Turk who was good in football. A few days after I’d fibbed to Austin, I brought up the subject again and admitted I’d been pulling his leg about my football experience. At first he didn’t believe me. After I repeatedly assured him it was the truth, he said: “Well then, how can an amateur play this well? I can’t be because of the level of play in Turkey, for we all see how poorly Turkey does in tournaments.” I instinctively sprang to my country’s defense by saying, “It’s true that the Turkish national team hasn’t done well in any tournaments, but that doesn’t mean they never will. You’ve seen how I play. I’m not all that good compared to those of my generation. I suggest you watch how Turks my age play. We’ll be successful in future tournaments.” My words proved to be prophetic. Galatasaray first won the UEFA cup and then the Super Cup, and the Turkish National Team placed third in the world. The players were all from my generation.”

Other than the successes we posted at the end of the 90s and in the first decade of this millennium, we have achieved nothing. This is true not only of Galatasaray but of Turkish football in general. We saw a live illustration of this last week.

The celebrations surrounding the winning of a cup 17 years ago raised some questions for me:

1. Do teams like Real Madrid, Barcelona, Manchester United, Chelsea and Bayern Münich, all of whom have won cups several times, take a few days in May every year to commemorate their victories like we do?

2. How have these teams managed to g o from success to success instead of gloating over a single championship?

I’ve written this repeatedly and I’ll doing it here again.  It’s obvious what Turkish football needs to do to reach the level of the other big clubs in Europe. It will take a long-term approach. Everyone will need to be patient and respectful. Below, I outline what needs to be done:

Let me take this opportunity to express my wish that sport, which is in many ways a country’s mirror, constantly develops and grows, that Fenerbahçe’s success in basketball is replicated in that most popular of all sports, football, and that Turkish football overall finally reaches its full potential.