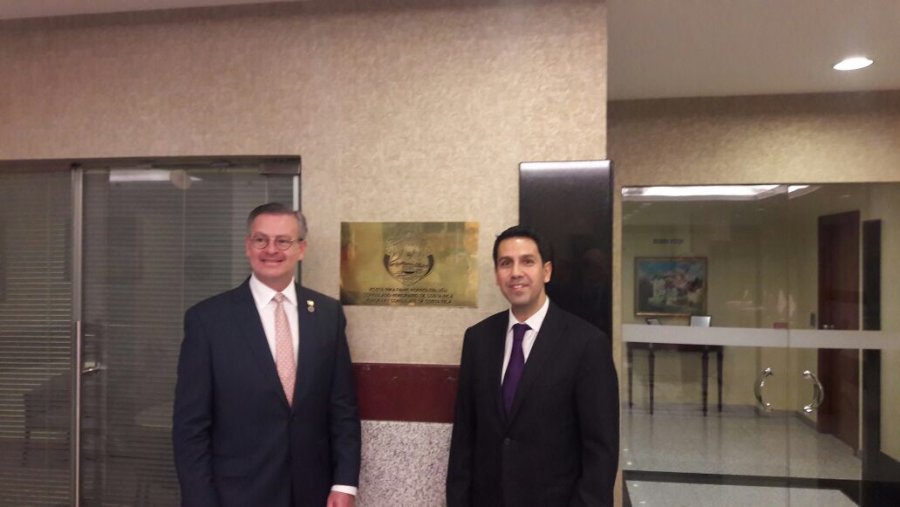 After nine years of duties at the Honorary Consulate of Costa Rica, I was considering leaving that post this coming year.  However, a meeting about two weeks ago with Foreign Minister Manuel A. González Sanz has led me to reconsider. The foreign minister and his undersecretary honored me with their words. In line with the quintessentially Costa Rican philosophy of ‘Pura Vida,’ a frame of mind that I have internalized while representing that country, I’ve revisited the question of whether to continue as honorary consul.

The II. Turkey – SICA (Central American Integration System) Foreign Ministers Forum was held on 20-21 April. Along with Costa Rica, in attendance were delegations comprised of foreign ministers, undersecretaries, deputy undersecretaries and high-ranking bureaucrats from the eight Central American countries of Belize, the Dominican Republic, El Salvador, Guatemala, Honduras, Nicaragua and Panama. Costa Rica was there in full force under the leadership of Foreign Minister Manual A. González Sanz. As always at these meetings, I accompanied the Costa Rican delegation.

On the evening of April 19, the day before SICA would officially convene on April 20, DEİK (a semi-public board charged with “business diplomacy” and the foreign economic relations of the Turkish private sector) organized an event at 7pm at the InterContinental Istanbul. I’ve been the deputy chairman of DEİK’s Central American Business Council for the past two years. This event was one of DEİK’s worthy initiatives.

At this event, where drinks and canapes were served, the first speeches were made concerning the jointly held SICA forum. The foreign minister of Costa Rica also made a speech. Everything went well that evening. I can say that the Costa Ricans made a bit more of a splash than the representatives from the other countries. Their foreign minister, a good-looking man who is actually an attorney, was accompanied by his elegant wife. I overheard some of the nearby chatter. “Costa Ricans look like fashion models,” some said. I had to smile at that. It doesn’t make sense to judge an entire country based on one person. In the same way you can’t evaluate the looks of Americans based on Trump or Obama, you can’t generalize about Costa Rica based on that country’s foreign minister or head of state.

Gratifying signatures
The following day official meetings were held, resulting in the signing of a Cultural Cooperation Agreement and an agreement to jointly combat trafficking in psychotropic substances and narcotics. Here are some photos from the signing ceremony:

On a personal level, I was extremely pleased that these agreements were concluded as I was preparing. By that I mean, as I wrote earlier, that I’m thinking of giving up my post as Honorary Consul next year. You can find a post on the subject here:  http://serhansuzer.com/en/nearing-the-end-as-honorary-consul-of-costa-rica. I’ll return to that subject in the concluding paragraph of this post.

The two days of official talks and visits ended with the delegations visiting President Recep Tayyip Erdoğan in Istanbul. I can sum things up by saying that the official talks to develop relations with the countries of that region went well.

On the final day of official activities, the foreign minister of Costa Rica visited our honorary consulate and the Procomer office.

That evening, I took the Costa Rican delegation to a seafood dinner at Galatasaray Island. Everyone was happy with the meal and their experiences. The food was delicious overall, but after the meze everyone swooned over the fish baked in a crust of salt. Both the tableside presentation and the flavor of that dish was amazing. The Costa Ricans said that the ocean fish they have in their country wasn’t as food as the fish we had that night. After a wonderful evening, I saw the minister off to his hotel.

The fiery display of fish in a crust of salt.

Thoughts on a demolition

Having just mentioned Galatasaray Island, I’d like to share my thoughts on the demolition that took place there this past Sunday morning. First of all, everyone knows from my posts that I am officially and emotionally attached to Galatasaray. I try not to miss their matches when I’m in Istanbul. I’m also a member of the Galatasaray Club and of GSYİAD (The Galatasaray Association of Executives and Businessmen).

My opinions concerning Galatasaray Island are different from a lot of the other members. It’s true that I’m personally acquainted with Mehmet Koçarslan, the owner of Reina, and Ali Ünal, the general manager. I’m especially fond of Ali and his brother Erkan. However, my loyalty lies with Galatasaray. I feel completely at ease sharing my thoughts here:

1. It was a mistake to change the name of Galatasaray Island to Su Ada (Water Island). It’s unacceptable for us to have changed the name just to prevent resentment from supporters of other sports clubs. Those who visit the island should leave their boosterism behind and enjoy the views of the Bosphorus.

2. It’s a fact that one section of the island, in particular, was overdeveloped. However, from what I understand most of the demolition took place not in that section but on another part of the island, where there had been structures for years, going back to the previous management.

3. The main reason Galatasaray Island became so popular, despite all the problems, is that it was run so well by Reina. Before Mehmet Koçarslan and his team took over operations Galatasaray Island was in a pitiful state, if you ask me. As soon as new management stepped in, it became a popular venue. Let’s give them their due.

4. It was wrong to show the demolition taking place on the island and the wreckage it left behind. Galatasaray Island is important for tourism. It’s become an internationally known brand, just like Reina. The image of torn down structures on the island was a further blow to the already struggling tourism sector and sends the wrong message to people overseas. For example, I won’t mention the demolition to the foreign minister of Costa Rica, who spoke highly of Galatasaray. It would be embarrassing to bring up such a thing.

5. To those friends of Galatasary who supported what happened, let me say this: If you want to bring about positive change on Galatasaray Island, find a business operator who will manage it better and is able to pay higher rent. Clumsy attempts to solve a problem without foreseeing a solution can only harm the club. There are, of course, kamikaze businesses able to pay more rent. But they won’t last long. Either they’ll go bankrupt and leave after two or three years, tops, or they’ll start to damage our brand over the long term. What we need to do first is extract a higher operating fee from the management currently in place. Treating a company with which you’ve signed a management deal like a squatter isn’t becoming of a club like Galatasaray. Organizations and businesses need a sense of continuity, whether they’re in the public sector, the private or are NGOs.

The demolition on Galatasaray Island was recorded in slow motion. I’d like to share this video, which documents the horrifying destruction that took place:

Meaningful correspondence with the deputy undersecretary

Getting back to the main subject, we saw off the official Costa Rican delegation on Saturday as they left for the Middle East. Deputy Undersecretary Francisco Chacón Hernández sent me a text message from there. An extremely active and successful bureaucrat, Chacón had read my blog and asked if I was really considering leaving my post as Honorary Consul. I told him I was. When he next got in touch he said (I’m summarizing here) that I was the face of Costa Rica in Istanbul, that he’d read how proud I was to represent his country and wanted me to know that Costa Rica was proud of me in return, that my nine years as honorary consul meant that I, as someone age 40, had spent a quarter of my life representing his country, and that my constant use of the phrase “Pura Vida”  and adoption of that concept as a life philosophy which had worked its way into my DNA made me as Costa Rican as any of the citizens of that country. Last of all, he emphasized that my continued contributions were needed to help the spread the philosophy of “Pura Vida”.

I thanked him for the great feedback and told him that Costa Rica had been a perfect fit for me, so much so that if I had the chance to go back and choose any country in the world to represent I would want it to be Costa Rica again.

I also let him know that I share the same values as his country when it comes to preserving peace and protecting the environment, adding that it had been a great pleasure to work with “Tico,” the term used for Costa Ricans. I pointed out, though, that I thought the post of honorary consul should come with a term limit, just as in the public sector. Ten years seems like about the right period to me, although that could be extended to fifteen years under extraordinary circumstances. In short, I explained that I had been serving at this post for nine years and that my intention was to leave the following year, but I was open to suggestions.

He then responded that he was pleased I was open to suggestions and said he would be spending three hours in Turkey on 16 May in order to transfer from a Middle Eastern flight.

We later confirmed the day and hours he would be in Turkey. On 16 May I went to the airport to meet with FM Manuel Gonzales in the VIP area. As always, I was waiting to accompany Gonzales and Deputy Undersecretary Chacon from the plane. The minister and I sat in a private section of the VIP area and began chatting.

We discussed a lot of things during this three-hour talk. When the subject of my plans came up, Chacon spoke first, then the minister. I also related my thoughts on the matter.
The minister asked, “How can we find someone who shares your values, works the way you do and is always such an idealist?” After half an hour of discussing this, we reached a conclusion. I told them that I had had someone in mind, but that this person was now living overseas, adding: “Alright then. Let’s not consider my resignation next year to be definite. I’ll continue until a suitable replacement is found. How’s that?” The minister nodded and shook my hand. I then accompanied him and the deputy undersecretary to the plane.

Foreign Minister Gonzalez during a visit to our Honorary Consulate.

Frankly, the way they valued my service was touching and motivated me even more. I will remain as honorary consul until I can confidently pass on my duties to someone else. I sincerely hope I can find such a person next year. But if I don’t, I’ll continue with the same degree of enthusiasm.

The week after that airport meeting, we accelerated our preparations for the opening of an exhibition by Jose Sancho, one of the Costa Rica’s leading artists. In my next post I’ll write about this amazing exhibition, which was held last week.

To sum up, even I no longer serve as the Costa Rican Honorary Consul my bonds with Costa Rica’s “Pura Vida” approach to life will remain strong. “Puro Vida” has become my life philosophy. As Chacon put it, it’s worked its way into my DNA. You can read more on what the philosophy of “Puro Vida” means at this link: http://www.serhansuzer.com/en/pura-vida-or-endowing-life-with-meaning

For now, on behalf of all my friends, let me say “Pura Vida” on more time!