The champions of our neighbourhood, Modafen! 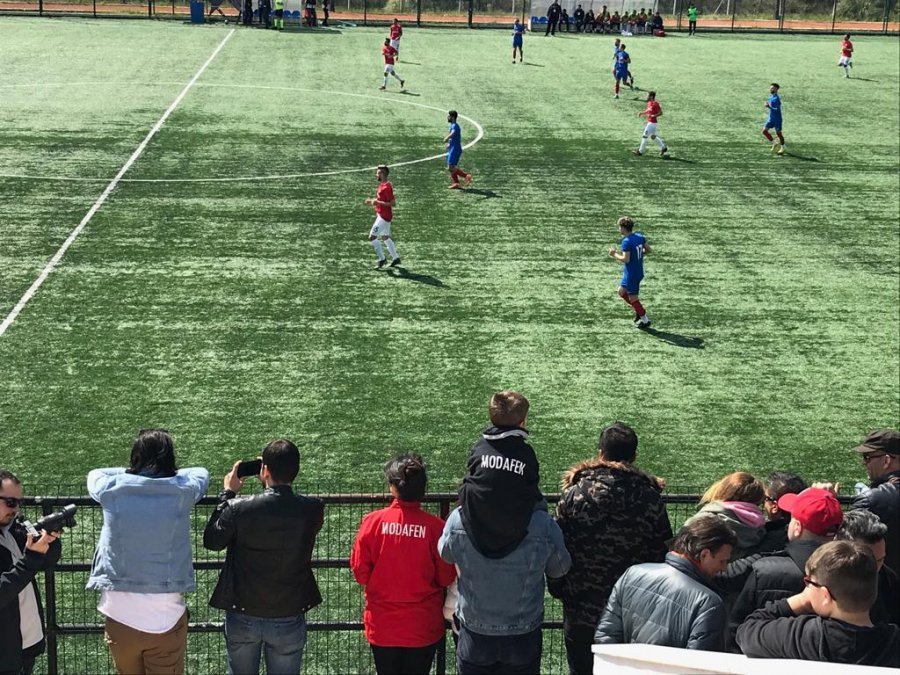 Fatih Kanberoğlu, who has contributed a lot to my sister in many ways, is one of my old friends and actually my new neighbor in Çekmeköy. He has also achieved great success with the Modafen Football Club, which he founded, as well as Modafen School, which provides versatile and modern education. By winning the group championship in the Regional Amateur League, they have now made their way to the path of the TFF 3rd League, in which I wish Modafen success in their elevation in the upcoming games.

My sister Nazli had a very difficult life. She broke her leg when she was 5. Then she had surgery 12 times in a row to fix her unhealed leg. And as her brother, I've taken care of her in many aspects for 20 years. From school to surgery, I was always there for her at the most critical moments, guiding her and doing everything I could for her.

As a result, Nazlı had difficulty going to school because of her leg while studying at TED High School. I was looking for a private lesson like class to cover the gaps in her learning. While chatting with my then-girlfriend, without no hesitation she said to me: “You should take your sister to Fatih”. Fatih had taken an important place in her life and while preparing for university, she had taken mathematics and geometry lessons from him.

The first meeting and developing of a friendship

For this reason, I met Fatih about 15 years ago. I went to his Moda classroom with Nazlı and explained the situation to him. Fatih quickly grasped the topic and started to work without wasting any time.

He handled the situation with Nazlı very well for many years. In spite of all the emotional ups and downs that Nazlı had and some opposing behaviors, he not only taught her, but also helped her to get along with her teachers in the classroom and complete her grades. We are very thankful to him for this.

Our friendship with him has always been solidified since the first day, we have even caught up from time to time even after he had finished up with Nazlı. But of course, because I lived on the European side and started my own business and got extra busy, I hadn’t seen him for a long time.

The surprise encounter after many years

This was until I moved my office to Çekmeköy and with a radical decision, moved to a new house in that area and when attending the gymnasium in my housing estate, in a surprised way we bumped into each other... This was the dialogue that happened when Fatih saw me in the gymnasium:

After we exchanged phone numbers, we greeted each other once more and continued with our gym workout.

After that, as we promised, we started meeting almost every week. In one of our meetings Fatih told me about his projects. Among these projects, Fatih crowned his successful career with his school in the field of education and started the sports club of the same school. They already apply a lot of attention and importance to sports at Modafen. He continued his efforts by establishing a football club called Modafen FC.

The rapid rise of Modafen Football Club and the championships

Starting from the bottom of the amateur cluster, they achieved 6 championships in the last 7 years and achieved great success in this field. In the last expedition, in the 11th group of the Regional Amateur League (BAL), they paved their way to championships amongst the well-known clubs such as Çanakkale Dardanel, Edirne, Kartal, Yeşilköy, Tekirdağ, Çerkezköy and Çorlu. As a result of all these chats, I personally went to a few games this season. These matches may seem interesting to others from the outside, but it seems quite normal to me that not only is the club owner the head of the team but at the same time manages the team by himself.

During the time Galatasaray FC had a few weeks of unpleasant matches, the games played by Modafen FC were like medicine to me. I went to the championship game yesterday. Modafen met all our expectations by defeating Kavaklı, a team of the town Kırklareli, 4-0 and became the champion of the 11th group. 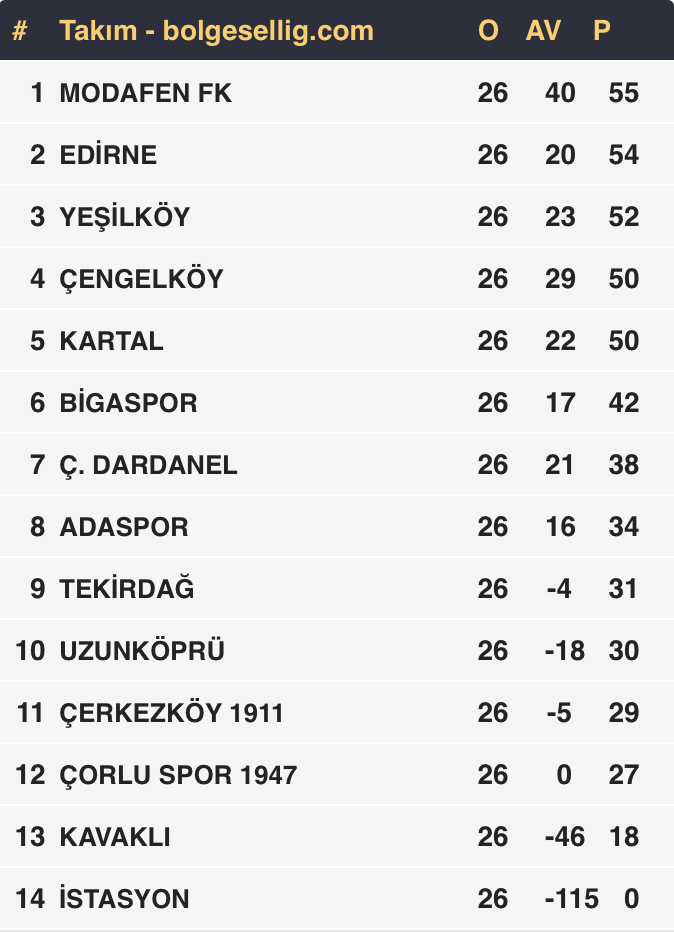 With a bad move in the first half, they scored a goal from a penalty to bring the results to 1-0. They recovered in the second half, and with two substitutions and additional motivation from Fatih, the face of the team changed completely and Modafen showed their real strength. By scoring 3 more goals, they knew how to win the match with a difference of 4-0.

My expectations of joys from Galatasaray and Modafen

Speaking of Galatasaray; the season that Modafen FC had is very similar to the season of Galatasaray. In the last 3 weeks, Modafen was put into second place being 5 points behind, and with the luck of the fixture, Edirne losing their last 2 games which put them in a position of being 3rd last resulting in a push to Modafen towards the championship. By wishing the same upon Galatasaray, I expect to see them, who are the biggest candidate towards winning the championship this year. (I said this when the score difference between us in the second half of the league was 8: I have full faith in my team.)

I want to experience the double joy of Galatasaray being the champions this year along with Modafen's moving up to the 3rd league.

In the meantime, to give you a visual idea of the game, here are some shots I took during and after the match: 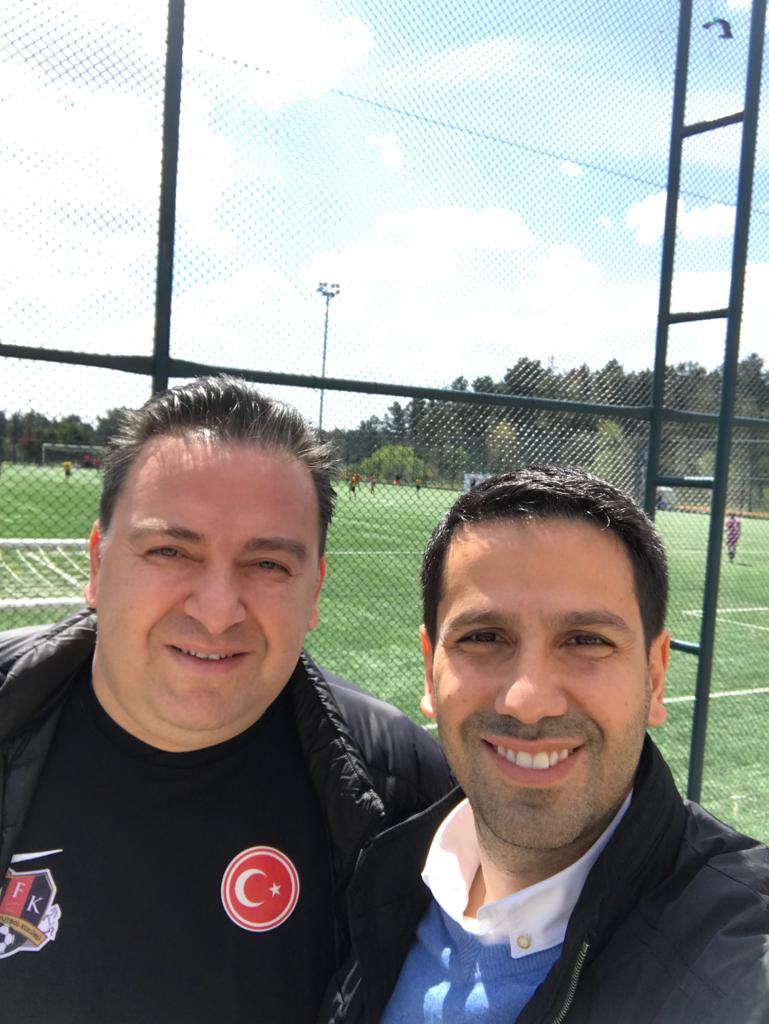 A photo with Fatih before the match 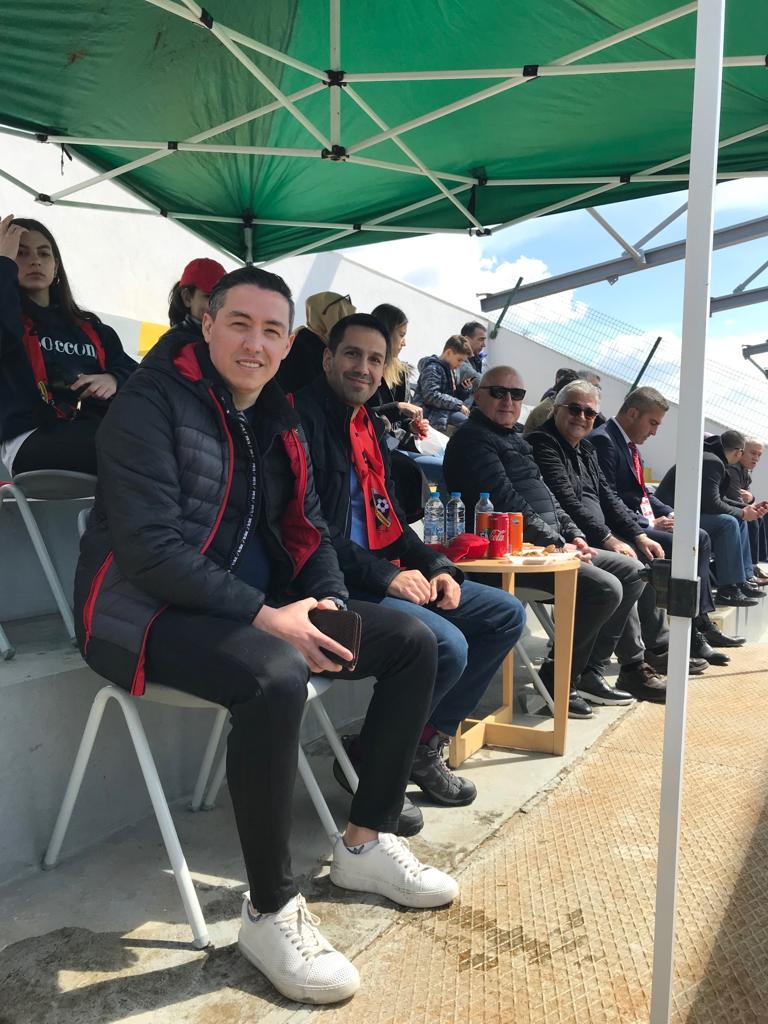 The protocol tribunal where we watched the match from

The moment the teams entered the field

The teams greeting one another

The starting whistle being blown

Enjoying the music during the game

The goal scored from the penalty shoot 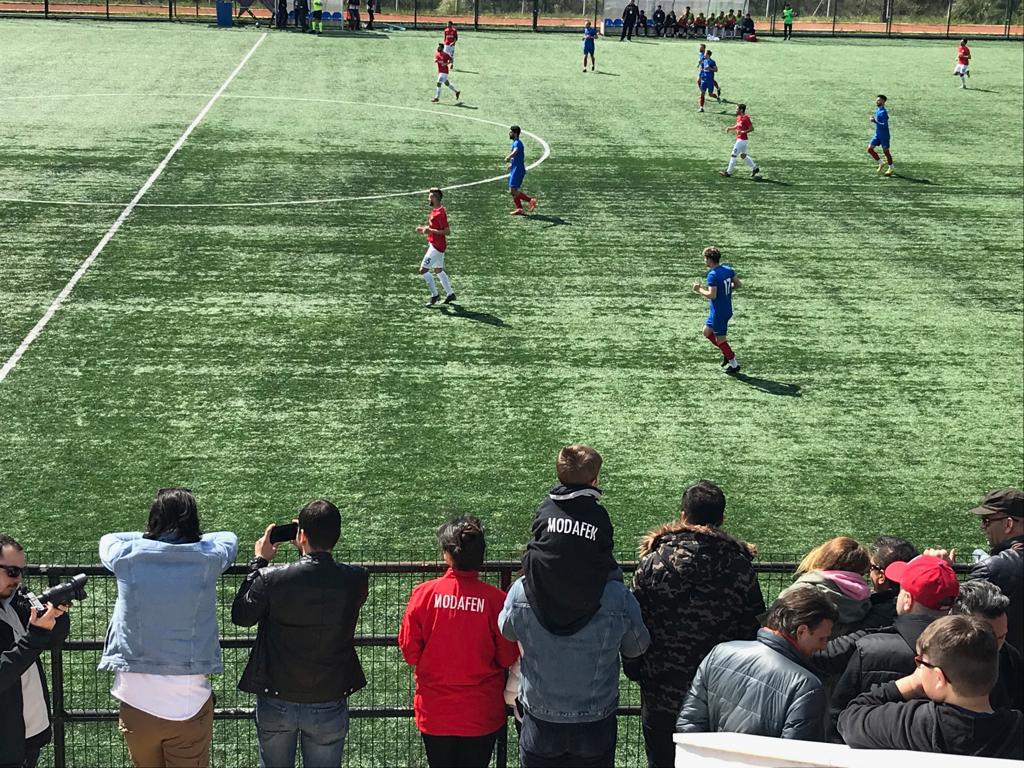 Celebrating the championship on the field

The dance of the footballers celebrating their championship

The finale of the celebrations 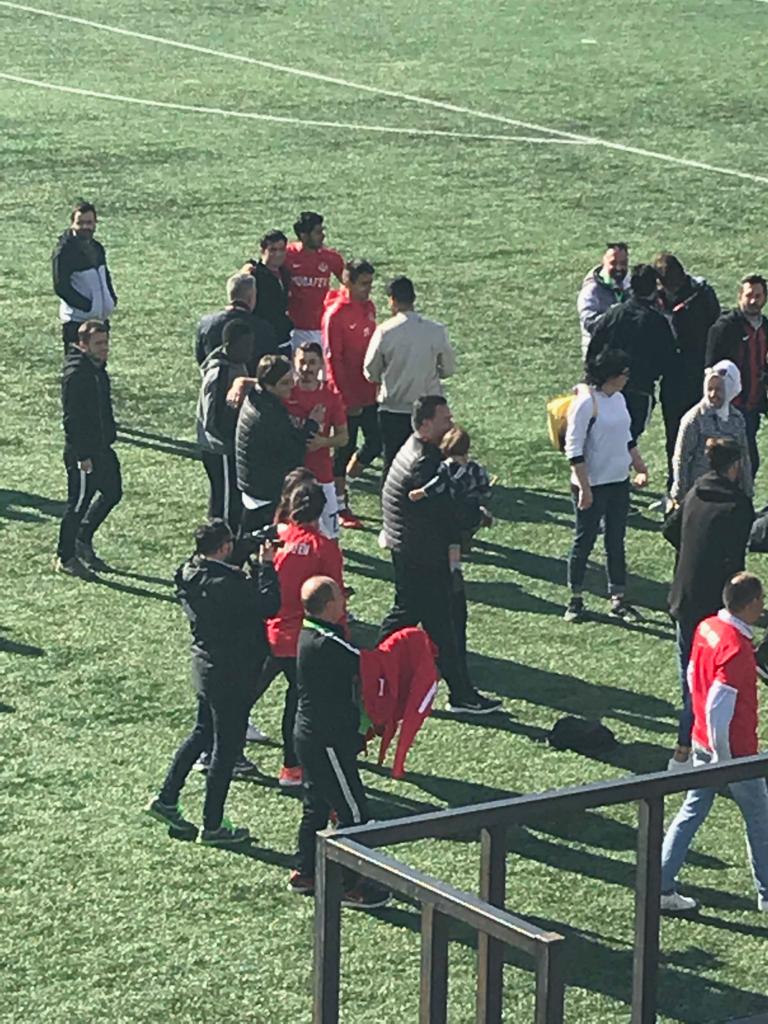 Fatih on the field with his son… 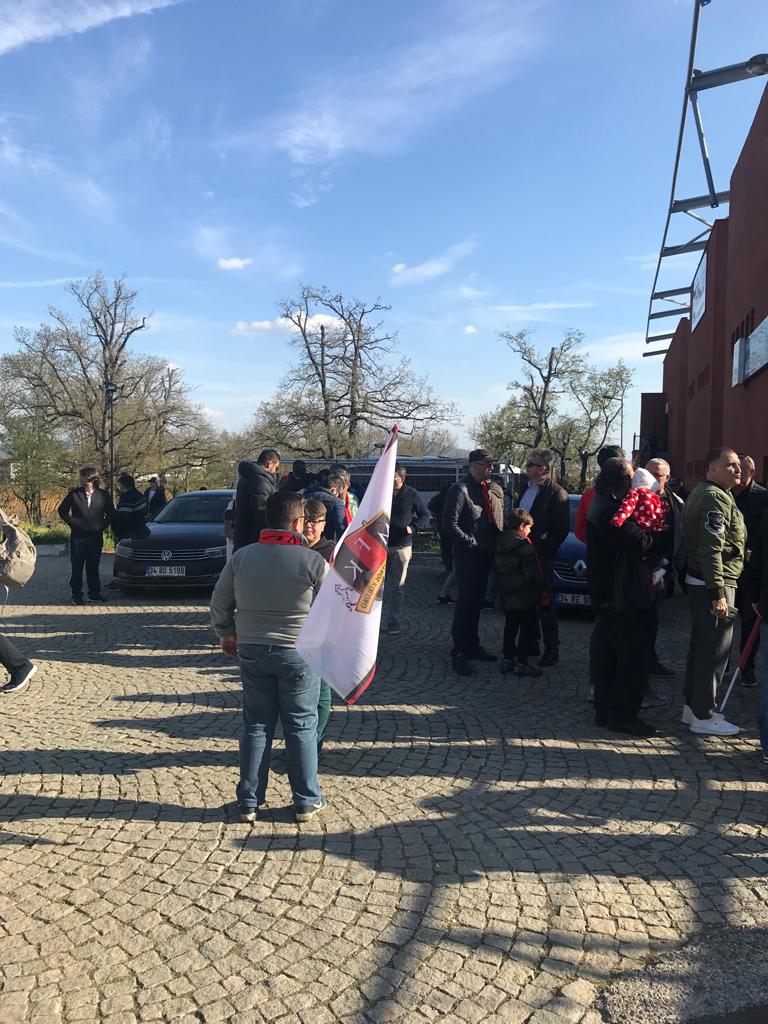 A photo taken after the game 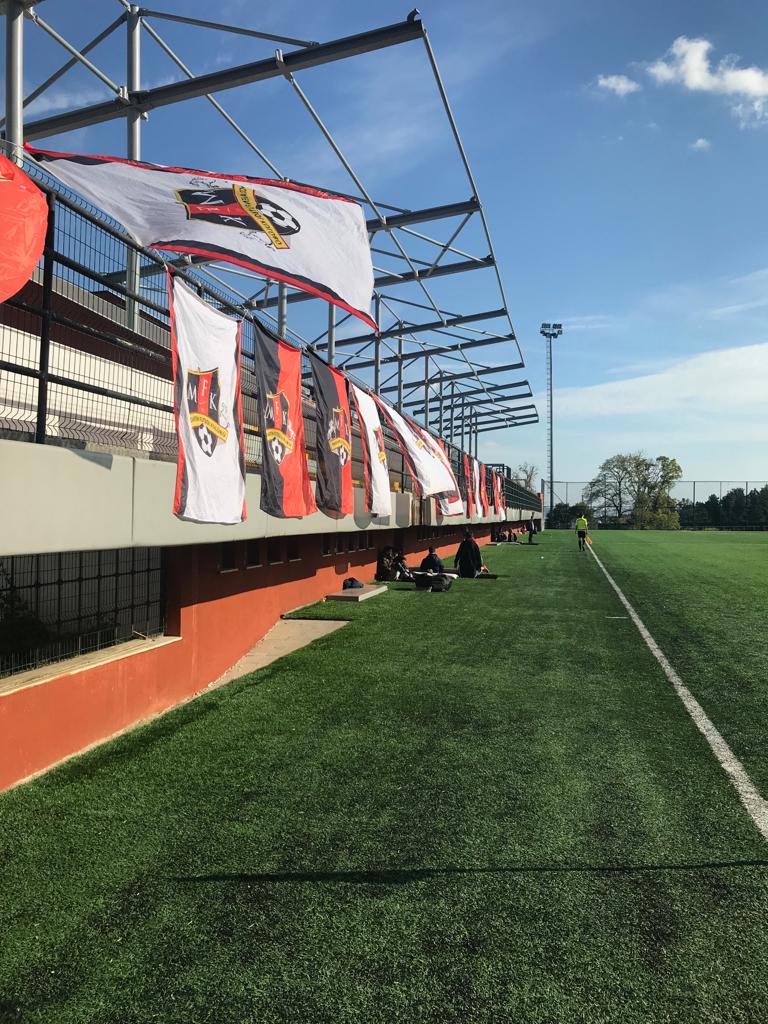 The view of the field 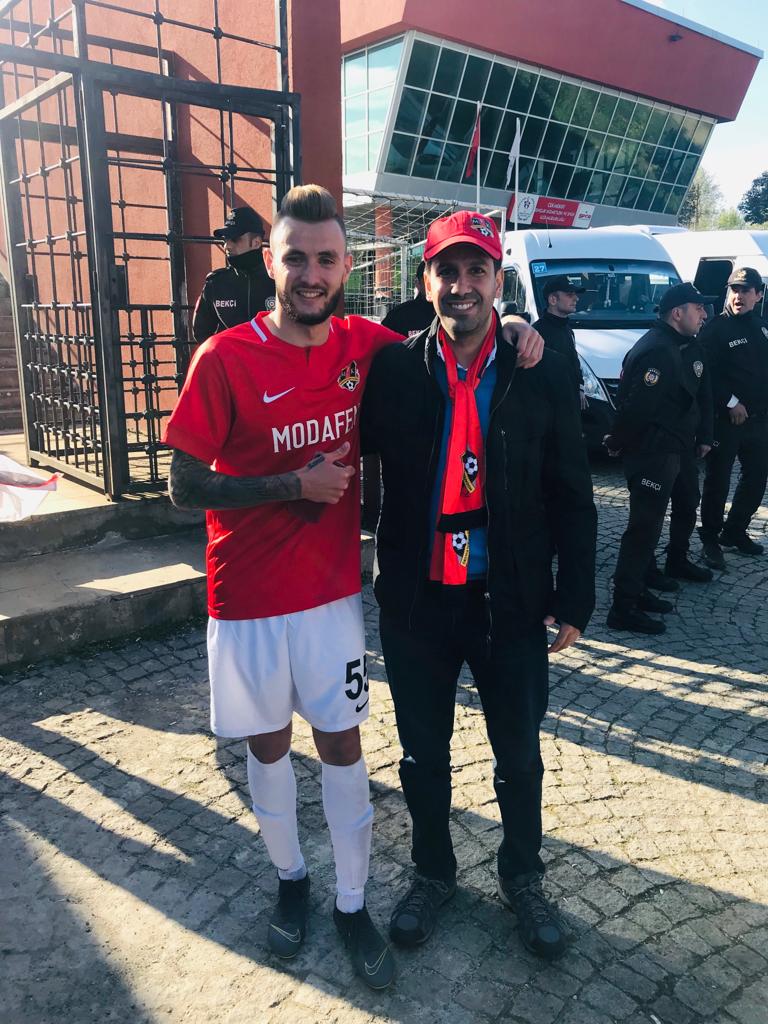 A photo taken with the Russian Modafen player after the game

Now Modafen FC will play in the elevation games in the first week of May. According to the status created in the BAL League, 9 of the 11 leaders of the TFF will appear in the 3rd League.

I won’t go into the technical details of these elevation/elimination encounters, where a complex method is applied and consists of several stages. I wish Modafen a lucky draw and I believe that they will continue their way to TFF 3rd League as a professional football team no matter what the draw comes out.

I understand what Fatih wants to do and his vision. So that’s why I support him in every way. We now want to see quality in football in Turkia. We wish women and children to be able watch the games together with men in a festive atmosphere. In addition to playing football well, we want footballers to develop their knowledge, experience and etiquette by taking good training and to be an example to the society as senior people. For these reasons, I would like to say this to Fatih, "May the road ahead for you be clear and smooth brother,". We will continue to serve humanity, homeland and our nation in different fields.