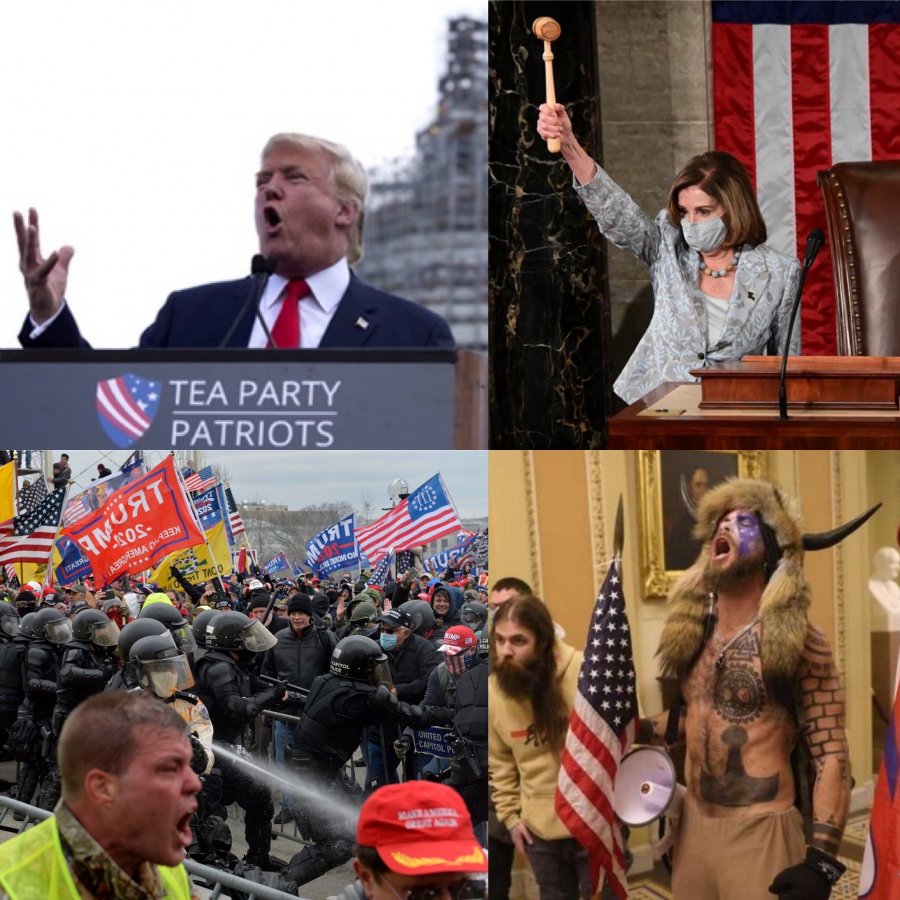 History is full of stories of nations trying to get rid of dictatorial leaders. We experienced one of the most striking of these last week. Trump, who has been the subject of controversy since he took office, has polarized the people of the United States in a way that has never been seen in history: those who say they are following Trump no matter what, and those who hate Trump and try to get rid of him. The fact that Trump lost the election and left the office to Biden on January 20 caused the war between the two poles to reach its peak. The summit took place in the past few days when Trump supporters stormed the Congress building. You can follow the sequence of events from this video: https://www.instagram.com/tv/CJzvAcvsmv6/?igshid=1rftu61cxq5ng

Emphasizing that Biden won the election fraudulently, in a bid to make a “revolution”, Trump provoked his supporters to raid the Congress building, which is one of the bastions of American democracy. American democracy survived this test, in which it was fighting for its life, relatively cheaply, with a day of turmoil, serious physical damage, and 5 deaths.

Perhaps America was able to overcome this problem in one day, its democracy passed a serious test and its system, which was built on solid foundations, managed to protect itself. The wounds will heal quickly, perhaps they will continue even more strongly. They will take precautions against the possibility of such events happening again. But what about other countries which are ruled by dictators or leaders with dictatorial tendencies?

We started this with Trump, who has a tendency to dictate. Let's continue with the disasters it caused or is about to start. Before opening up further topics, let's take a look at the definition of disaster: an event caused by nature, technology or human beings, which causes physical, economic and social losses for the whole society or certain segments of the society, stops or interrupts normal life and human activities, and where the coping capacity of the affected society is not sufficient. Disaster is not an event, it is the result.* You can apply this to all dictators or leaders who tend to be dictatorial in the world:

In order to protect their position, dictators create enemies and try to instil in the people that it is possible to fight this enemy only if they maintain the leadership. They try to increase their popularity. We have come across these statements a lot during the Trump era. For example, to me, portraying a country like North Korea as a great threat to the United States is mocking people's intelligence. Likewise, Democratic Speaker of the House of Representatives Nancy Pelosi said that she had discussed with the Chief of Staff, Mark Milley "the need to block the necessary codes to keep an unstable President away from military conflict and ordering a nuclear attack, and the measures that can be taken to do this" (see: https:/ /www.forbes.com/sites/nicholasreimann/2020/09/09/trump-claims-to-have-built-a-new-secret-nuclear-weapons-system/?sh=6dde54ee1a1e). Going even further, Pelosi joined those calling for Trump's impeachment. Do you know what I mean?

Since nuclear war is the most extreme point of wars and dangerous enough to destroy even humanity, I wanted to introduce this as a separate title. With Trump's ever-changing mood and tendency to aggression, we have observed nuclear war threats from time to time. You can even read the news that Trump has a secret nuclear weapon built in the Pelosi article on Forbes. This is such an important issue that after the events in Congress, Pelosi took action to prevent Trump's access to nuclear weapons (see: https://www.bbc.com/turkce/haberler-dunya-555593463).

The deep polarization in society has also fuelled the danger of civil war. The black and white conflict that arose from racism, which I'll go into more detail in the next article, conflicts between liberals and conservatives, and tensions between Trump supporters and those who hate him. All these are factors that will trigger a possible civil war.

This problem, which in my opinion is extremely primitive and still affects societies in the 21st century, has been going on for centuries on US soil. As a matter of fact, when the George Floyd incident broke out last year, this collective and systematic racism problem in America peaked and millions of people took to the streets to protest. I wrote about this subject in my article titled “The never-ending plague in the brain: Racism (https://www.serhansuzer.com/en/beyinlerde-hic-bitmeyen-veba-irkcilik). Trump, not only did nothing to calm these events, but he exacerbated them with his statements. He even declared that he implicitly supports some radical groups that engage in systematic racism. These irresponsible reactions of the US leader have increased friction and caused deaths and endangered the lives of millions of people. Let's not forget that due to these conflicts, the lives of both blacks and whites are in danger, and the risk of a civil war in the future has increased.

In addition, the American security forces, who took drastic measures against the peaceful protesters regarding "Black Lives Matter", and the tolerance of Trump supporters who came for the election protest and went as far as entering the Congress building (even those who took selfies) became the subject of serious criticism. I would like to share with you a video criticizing this hypocrisy: https://www.instagram.com/tv/CJy-_dCsrJf/?igshid=vtuo68zd0bj7

Even Biden publicly criticized this issue and went further, emphasizing the need for restructuring at the Department of Justice: https://www.instagram.com/tv/CJzhXP2AK4D/?igshid=1sk0kdzw064an. This double standard of the American government is a dilemma and shown clearly. Trump has deepened this problem instead of solving it.

While the Trump administration is trying to create false enemies and make their supporters stronger, on the other hand, terrorist attacks have increased in real terms. The main reason for the increase in these terrorist attacks is that Trump continued his provoking statements and increased polarization. Many terrorist organizations have been activated due to these provocations.

By taking the situation to another dimension and building a wall in Mexico, Trump, thinks he is doing the USA a favour with the primitive measures he took (see: https://tr.euronews.com/2020/06/24/trump-tan-meksika-wall-na) -rug-world-n-most-strong-wall-covid-19-u-even-stopped). However, the Trump administration caused the immigration crisis to explode and trampled humanity. To give you an example, as you can read in the link above, more than 7 thousand people who set out from Central America in 2019 reached the US border via Mexican territory and were detained by the US border security forces. It was reported in the media that there were thousands of children amongst those detained, many of whom were kept under poor conditions to be sent back. There were many reactions to the emerging humanitarian crisis, both inside and outside the country.

Don't think that Trump has nothing to do with climate change. The Trump administration, which pulled the USA out of the Paris Climate Agreement (see: https://www.bbc.com/turkce/haberler-dunya-40129916), constantly supporting fossil fuels and taking a stance against the renewable energy sector, is one of the chief culprits of climate change. Considering that the USA is the country with the number 1 carbon emission in the world, the damage done by the Trump administration to the world in terms of carbon emissions and therefore climate change is incalculable.

Another type of disaster caused by fossil fuels is air pollution. Fossil fuels should be prevented from being burned and used for energy, because this increases carbon emissions and causes air pollution. You may think that there is no air pollution, but there are millions of people who die prematurely every year from air pollution (see: https://www.bbc.com/turkce/haberler-dunya-47537853). He has always been his biggest supporter.

The Trump administration has something to do with forest fires. First, let's take a look at naturally occurring forest fires. Extreme temperatures are fuelled by the burning of fossil fuels and excessive carbon emissions. This heat causes forests to burn. We experienced this very painfully in Australia at the beginning of last year. All over the world, forest fires caused by extreme heat as a result of climate change continue to increase. Likewise, man-made forest fires are purely for profit. There is a tendency all over the world to create real estate projects by burning down forests in valuable locations. That fits the Trump head space very well.

It is very important to proactively prevent human-induced disasters so that people can continue their lives in a comfortable environment. In this way, you can prevent serious loss of life and property, and prevent psychological disturbances that people may experience.

You have read above a summary of what disasters dictators have caused in their country. In a world where there are no leaders like Trump, who portray this trend or go beyond this trend and are registered as dictators, the occurrence of man-made disasters can be seriously prevented.

The US seems to have overcome this problem for now. Of course, the emergence of another dictatorial leader who is more intelligent, cunning and strategic than Trump in the future may upset the United States. They will also then need to take action.

But what about other countries? It is certain that humanity will suffer more.

I will not be able to see this in my own generation, but I hope that in the future, humanity can fix serious system failures such as dictatorship and establish healthy management systems in which everyone contributes constantly, a common mind emerges, problems are solved more quickly and dynamically with micro-governance, and that enables collective action.

In order to solve this problem that concerns our existence, it is necessary to take the right steps in a peaceful and inclusive way in the period we live in so that concrete results will be achieved maybe a few generations from now. I hope humanity will take a breather.

Such a change is very difficult, but the emergence of one or two good examples will trigger change in all countries. It is enough to show that these things can be done differently. Aren't there people and communities in this world who can create this change? Surely there is.

* The description of the word disaster was taken from the website of AFAD. You can find this definition at https://www.afad.gov.tr/aciklamali-afet-yonetimi-terimleri-sozlugu link.

Here is a funny video comparing Trump with the Heads of State of African countries:

This time, the funny hosts of the late-night chat and stand-up shows were speaking of the events in a very serious manner: https://www.instagram.com/p/CJw1sY_sViv/?igshid=12gplk317yyb

World leaders' interpretation of the grave events in the USA: https://www.instagram.com/p/CJxDb97AdSV/?igshid=13s4p306prkw3

Reflection of events in the American and world media: https://www.instagram.com/p/CJwXUt5FwEq/?igshid=g5j2yxxh4mq7

A video showing the symbols of hate that emerged during the protests: https://www.instagram.com/p/CJwsKXAMZwD/?igshid=ngimfu7qvz9

This is a wonderful message from the famous actor and former California Governor Arnold Schwarzenegger who quoted sections from his own life about the events: