What would’ve happened if the couple who found the vaccine worked under Turkia’s conditions? 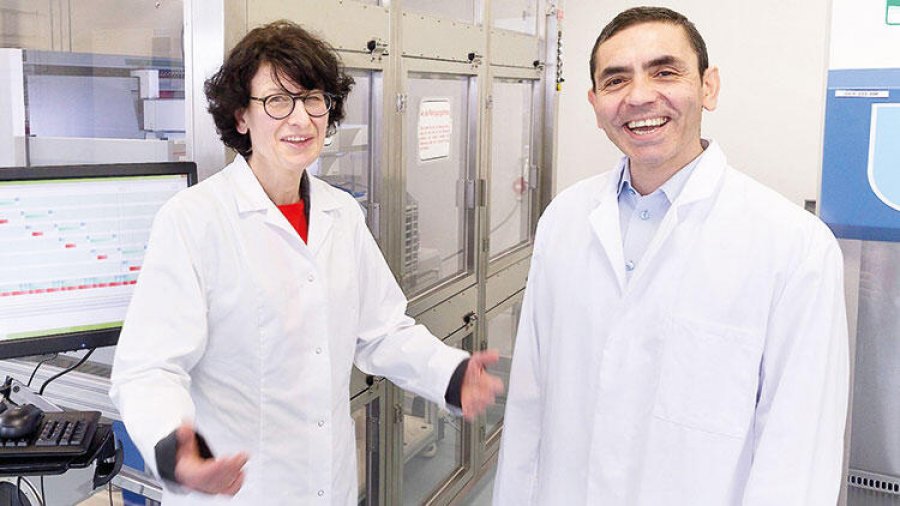 We got great news last week. There was news in the media of a vaccine found to bring an end to the Covid-19 pandemic, which was everyone's nightmare in 2020. The interesting thing is that BioNTech company, which originated from Germany, that everyone trusts with its engineering and technologies, was founded by Ozlem Tureci and Ugur Sahin, whose families immigrated from Turkey to Germany. In this article, I will talk about this couple, who have achieved incredible success but have faced the possible scenario of "What would’ve happened if the couple who found the vaccine worked under Turkia’s conditions?”

This wonderful news delighted me last week. Let's get to know Ozlem Tureci and Ugur Sahin, who are the couple who found the vaccine to end the Covid-19 epidemic that has become a global epidemic and has taken millions of lives (Source: https://www.milliyet.com.tr/gundem/ugur- sahin-ozlem-tureci-who-where-from-corona-rebel-founder-ugur-sahin-ve-ozlem-turecinin-hayati-6351300)

Who is Ugur Sahin?

Prof. Dr. Ugur Sahin was born on September 19, 1965 in İskenderun. At the age of 4, he went to Germany with his family. His family worked at the Ford factory in Cologne. I would like to share with you a picture of Ugur Sahin taken with his family in his childhood:

Prof. Sahin attracted attention with his interest in scientific research and experiments at a younger age. Watching the program "Immortality is Deadly" on German television on cancer, Ugur Sahin studied medicine at the University of Cologne, taking Paul Ehrlich as an example, who discovered the modern immune system in the 19th century and developed chemotherapy for cancer for the first time. At the suggestion of his professor, he started working at the University in Hamburg Saar. Making a name for himself with researches against cancer, Prof. Ugur Sahin developed a vaccine that separates the cancerous cell from the healthy cell and destroys the cancerous cell. Working on antibodies against diseased cells in the breast, colon, lung, pancreas and prostate cancer, Prof. Sahin, and his wife, Dr. Ozlem Tureci were working on a vaccine against skin cancer called melanoma. After the spread of Covid-19, Prof. Sahin turned his interest to this area. Prof. Sahin worked with the Swiss scientist Rolf Zinkernagel, who received the Nobel Prize in Medicine in 1996. He then founded the BioNTech company in 2008. At BioNTech, around 80 scientists conduct research on cancer today.

Born in Lastrup, Germany in 1967, Dr. Ozlem Tureci became the BioNTech Medical Chief in 2018 after serving on the Clinical and Scientific Advisory Board for ten years. Tureci, 53, is also the President of the Cancer Immunotherapy Association.

Tureci's family, whose father is a doctor in Istanbul, immigrated to Germany before she was born. Tureci met her husband while working in Hamburg. "Even on our wedding day, we worked in the lab," says Tureci. The couple were working at the Ganymed company that teaches the immune system to fight cancer with modified genetic codes. In this application, the immune system perceives cancerous cells as a virus entering the body and tries to eliminate them. Ganymed's sales were the largest medical company sales to date in Germany.

Aiming to revolutionize the field of vaccines by using mRNA technology at BioNTech, the couple is now using this method for the Coronavirus vaccine. According to Euronews, the couple predicted that this would happen before the coronavirus epidemic turned into a global pandemic, and decided that they should immediately start vaccine studies with this method they have developed for 25 years. The duo, who called the board of directors for an emergency meeting, made an effort to convince the managers who had thought that what was happening in China would not affect the whole world.

I would like to share with you what immediately crossed my mind after reading this news and the biography of this wonderful couple:

Solutions based on an elimination of viruses

The first thing that came to my mind was that for more than 10 years, I had been saying that viruses can be suppressed but not eliminated, and that profit-oriented pharmaceutical companies are the major sinners. I was also emphasizing that we need to regulate our immune system because viruses cannot be destroyed. When I read that the technique BioNTech uses is based on exactly this, I said with a smile on my face, "This is it!". Dr. Ozlem Tureci and Prof. Dr. Sahin, you both are amazing!

Also, last year, I went to Germany as a guest of a conference and made a presentation. I wrote an article praising the well-educated Turks in Germany which I met before and after my speech in Frankfurt on 9 November 2019 at the "Renewable Energy and Environment" workshops of the Turkish Engineers and Architects Union (TMMB) Higher Education Turkish Immigrants (YÖTG): https://www.serhansuzer.com/en/almanyanin-parlayan-turkleri

About a year after this event, I was really happy to read about the worldwide achievements of Turks in Germany. Afterwards, I started to think about what the people living in our geography could do if given the opportunity.

Problems that the same couple may have encountered in our country

I tried to visualize the scenario in my mind about what would’ve happened to this couple, Ozlem Tureci and Ugur Sahin, who have given their years to achieve this incredible success, if they rolled up their sleeves to do the same work in their homeland, Turkia, instead of Germany. I didn't like the result. Although not limited to what I write below, I think more or less the following would have happened:

As a result, the Covid-19 vaccine, which will save the world from the epidemic, would be left for another season, and we would be left in the hands of countries that make inconsistent statements on this issue. They would then be drinking their Turkish tea (they celebrated the good news when the vaccine was approved by drinking Turkish tea) in the garden of the hospital while waiting for their relatives who had been hospitalized with Covid-19 in a state hospital.

To be the cradle of civilization again

Now I ask you. Will technologies such as sustainability, biotechnology and artificial intelligence, which can be a solution to the problems of humanity, come out of Turkia in the current business cycle and with this mindset?

As long as people like me who give their best to this country, fight all the bad intentions around them and strive to continue on their own path, are supported. If we win the war and rise, it will pave the way for those who come after us. If we are successful, this geography will become the cradle of civilization again as it was in the past.

Despite all the difficulties I have experienced, I will continue to do my best. Because I want to see Turkia become the cradle of civilization again in my lifetime.